The key conclusion is that for London to grow and thrive, it is essential that London’s residents, workers and visitors do more walking and cycling and use public transport more to improve their health and the environment, to make streets work more efficiently & keep London moving. 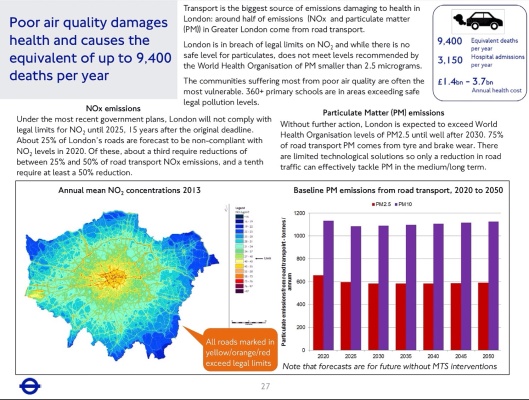 The life expectancy of Londoners has been increasing but adults are living more of their lives in poor health. This has major repercussions for the NHS and adult social care.Adults need at least 150 minutes and children 420 minutes of physical activity a week to stay healthy and reduce their risk of common, preventable diseases. Building physical activity into your daily routine by walking or cycling is one of the best ways to stay active and healthy. Currently, a third of Londoners achieve their recommended level of physical activity from active travel alone.

Cycle travel grew by 133% London-wide and 221% in central London between 2000 – 2015. There is considerable opportunity to deliver growth in cycle travel, with more than nine million journeys currently made by a motorised mode every day that could be cycled instead. 77% of Londoners believe that cycling is enjoyable and people continue to cycle in London because it is fun, quick, convenient, cheap and a good way to keep fit.

People that don’t currently cycle in London can be concerned about safety and worried that cycling may not be a convenient option for them – to help them start cycling means overcoming the following barriers:

At present, 57% of London households own a car, making 6.8m car trips per day. Car
ownership is the strongest determinant of inactivity – 70% of people without a car do
some activity compared to 50% with one car. Since its invention, the car has provided
welcome connectivity and opened up new opportunities. Even in a densely populated
city such as London, some journeys can only reasonably be made by car. But the amount of space that can or should be taken up by private road transport is limited, and the population is growing.
As well as prioritising more space-efficient and sustainable modes, research suggests that most people agree that the limited remaining space should be prioritised for
‘essential’ traffic.

Private cars, taxis and private hire vehicles take up three quarters of the road space used for personal travel in central London but account for just a fifth of the personal
distance travelled.

Under the most recent government plans, London will not comply with
legal limits for NO2 until 2025, 15 years after the original deadline.
About 25% of London’s roads are forecast to be non-compliant with
NO2 levels in 2020. Of these, about a third require reductions of
between 25% and 50% of road transport NOx emissions, and a tenth
require at least a 50% reduction.

Transport is the biggest source of emissions damaging to health in
London: around half of emissions (NOx and particulate matter
(PM)) in Greater London come from road transport. London is in breach of legal limits on NO2 and while there is no safe level for particulates, does not meet levels recommended by the World Health Organisation of PM smaller than 2.5 micrograms.

The communities suffering most from poor air quality are often the
most vulnerable. 360+ primary schools are in areas exceeding safe
legal pollution levels.

Without further action, London is expected to exceed World
Health Organisation levels of PM2.5 until well after 2030. 75%
of road transport PM comes from tyre and brake wear. There
are limited technological solutions so only a reduction in road
traffic can effectively tackle PM in the medium/long term.

Climate change is a serious threat to global quality of life. Carbon dioxide concentration is 40% higher than in pre-industrial times and between 1880 and 2012, the earth’s surface warmed 0.85O Celsius. London’s transport providers must play their part in delivering reductions in carbon emissions. The Mayor’s ultimate ambition is to make London a zero carbon city by 2050.

While transport CO2 emissions are projected to have fallen by more than 2 million tonnes by 2025 from 1990 levels, they will still be 2.35 million tonnes above the target previously set for 2025. Meeting this would require a reduction in emissions equivalent to a 40% reduction in road traffic.

Technological advances will reduce vehicle emissions but this will be made quicker and more feasible if the distance travelled by car is reduced. London’s bus, taxis and private hire fleets are on a pathway to reach zero emission.
London’s rail services are primarily electric so CO2 emissions will decline with the decarbonisation of the energy supply. Need the government to electrify all remaining
diesel lines. Emissions arise from the taxiing, take off and landing of aircraft at Heathrow and City Airport. Plans to expand Heathrow’s third runway are unclear on what this would mean for meeting the UK’s climate change targets.