Why we urgently need to review the Congestion Charge

When the Mayor of London, Ken Livingstone brought in the Congestion Charge Zone on February 17 2003 it was a brave and radical new policy for London and a timely birthday present for me.

In those intervening 14 years our economy has changed markedly. Anecdotally many Central London residents and visitors have become aware of increased congestion in the day time, evening and at weekends. People complain of increased road danger, air and noise pollution, slower bus journeys and more sirens disturbing sleep as emergency services struggle to move efficiently through stagnant evening and night time car traffic.

In Fitzrovia, 70% of residents live car-free lives. This is in line with the majority of Central London residents. It begs the question where is this extra traffic coming from?

Reasons for Freedom of Information request

When I stood as an Independent London Mayoral Candidate in 2015-16, I asked Transport For London why the Congestion Charge only covered a third of the week, when there was clearly a problem 24/7?

I was also incensed when TFL  waived the Congestion Charge during a spike in air pollution over Christmas and New Year 2016/17. This meant all residents, workers and visitors were exposed to higher air pollution in Central London. It is highly likely this build up of particulates contributed to the black alert in January 2017.

Current and historical TFL data releases have only showed motor traffic composition for the Congestion Charge hours, which is one third of the calendar week. I believe this is not giving the whole picture.

I have extracted data for cars, Taxis and PHVs because they are the least efficient use of public space and contribute more proportionately to road danger, air pollution and congestion.

The  data I received for April 2017 clearly shows a marked escalation in cars from 6pm Monday-Friday and at weekends. On Sunday alone, 137,461 cars are entering Central London.

This is my my initial interpretation of the data:

Mike Brown, head of Transport for London said at the London assembly Transport Committee this year that “anyone bringing a car into London has got the wrong end of the stick”. He is absolutely right. This is echoed by Janette Sadik-Khan, a former commissioner of the New York City Department of Transportation. She commented recently at the Living Streets Summit 2017 that reducing motor traffic IS a bus priority measure. It is a priority measure for walking and cycling too.

The Mayor of London and Transport for London have a duty of care to protect Londoners, workers and visitors and increase quality of life and health. Prioritising cars over the well-being of residents is an equality, social justice and moral issue. I hope that the new London Transport Strategy will address this seriously and urgently. 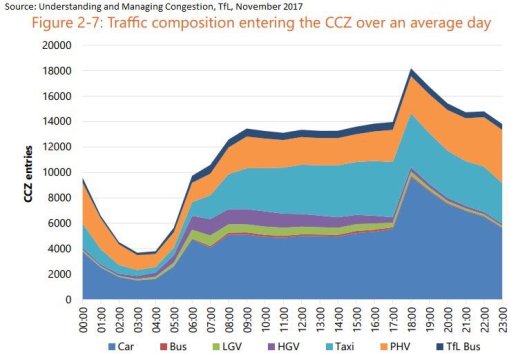 3 thoughts on “Private Car problem solved in Central London? Not according to new 24/7 data ”