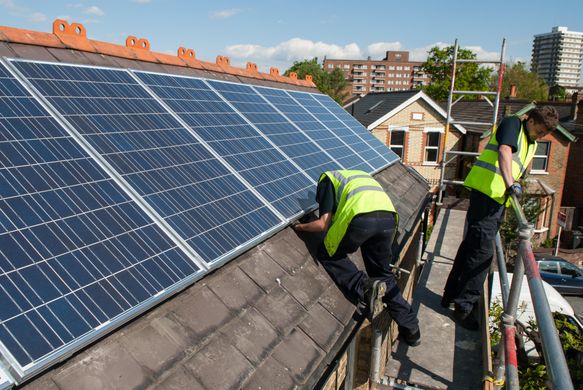 Alex Steffen calls it ‘predatory delay’, because in a climate emergency ‘winning slowly is the same as losing outright’.
At COP24, in December 2018, Greta Thunberg rightly told us to ‘start focusing on what needs to be done rather than what is politically possible’.
So let’s mobilise and get on with the job at hand and pin solar to every viable roof.

When I travel on the Overground across London, I often scan the roofs, that are the defining feature of our city. They remain an obstinately underused and  undervalued resource.
Whilst the Mayor of London can draw energy from the solar panels on the roof of City Hall, his citizens are cut off from sustainable energy in their communities, homes and businesses. 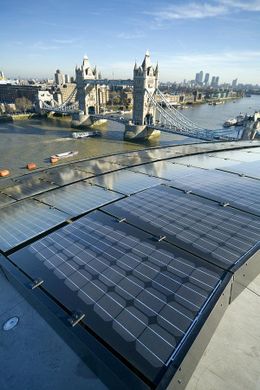 Decarbonising and decentralising energy is essential for the deep transformation and rapid transition needed to avert the worst of Climate Breakdown. Energy democracy starts from the standpoint that energy is a common good.
Ensuring solar is available to every Londoner, makes a just transition possible. Everyone must have access to a good quality of life in a sustainable world. And solar benefits everyone, reducing overall greenhouse emissions and air pollution.
Recently the Australian electric grid failed in a life threatening heatwave. Some energy users were cut off to ensure ‘system integrity’. This puts vulnerable people at risk. Just one of the many reasons localised energy security is vital.

So why are we delaying?

Wriggling out of responsibility is not an option

In his Zero Carbon London – A 1.5C Combatible Plan, December 2018, Sadiq Khan says
‘Our research shows that to up the pace of action, the Mayor will need more powers and funding from national government. This is the only way to tackle this most urgent issue.’
Whilst having extra funding and powers from Central Government would be ideal, we cannot rely on this. And it is clearly not the ONLY option.
US cities have decided to move  forward with their programmes of Climate Action in the face of Donald Trump.
Moody’s report “Local government heightened focus on mitigating climate risk is credit positive” sets out how failure to mitigate and adapt will affect city credit ratings.
No Mayor should put his/ her cities ability to obtain economically affordable credit at risk.
Kicking the ball of responsibility back and forth between local government and central government is predatory delay.
We must pin them both down.

Money, time and energy is being whittled away on ‘innovation’, which is little more than novelty. Often it is just a marketing ploy based on the ‘hope of the company’ when there no viable, socially useful service or running product. Has City Hall been captured by the tech giants with their marketing gimmicks? I even hear government officials rolling out the marketing phrase ‘They are coming’. WTF.
When science denial becomes sufficiently untenable, “innovation” becomes the new mantra.  Let’s not forget that innovation proponents Google, Facebook and Microsoft sponsored a conference that promoted climate change denial .
And the trade group Business Europe (which includes Facebook and Google) ‘oppose’ EU climate efforts. A ‘leaked document details Business Europe’s campaign to undermine EU attempts to cut climate emissions’.
Republicans have now settled on innovation as their primary position to counter progressive Democrats who have grown louder in their calls for a Green New Deal.
‘Most of the party’s prominent figures have opted for the second route: bullshitting. In some cases, it’s just an incoherent pastiche’.
I can confirm that Bulshitting /Incoherent pastiche is also the modus operandi of the ‘Innovation’ front in London.
We must learn to prioritise and create a hierarchy of energy use for the common good. Not act like a gullible trekkie, lured into a sci fi fantasy.

We know how to do it 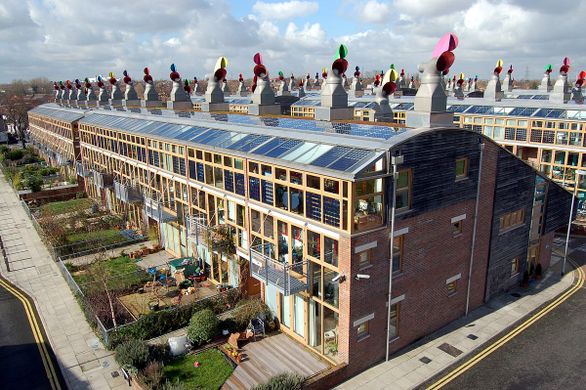 Solar photovoltaic (PV) panels have declined in cost by around 99 percent over recent decades. and future cost declines are most likely to be found in accelerated deployment.

The Mayor currently has a Solar Together offer for Londoners.  A friend, who has successfully gone through the process, says that is was relatively straightforward: A £150 refundable deposit, followed by a survey to assess the installation and scaffolding requirements, and then 3 months later the panels were installed. A 3.6kW array of 12 panels with all the associated gubbins – cabling, invertor, installation and scaffolding came to £4500.

But not everyone can afford such high costs, so I do wonder why we aren’t we offering rooftop solar for free to Londoners?

And how can we speed up bureaucracy? Here is advice from Historic England on considerations for older buildings.

It is the logistics that are missing

‘A third of households generating energy from the sun – would allow the UK to produce about 6% of its annual electricity needs from solar power, with as much as 40% coming from the panels on sunny days in summer, by 2020. These figures are comparable to those of Germany, which has made a major push on solar power in the last decade.’
In 2016, a study by consultancy Energy for London found that just 0.5% of London’s 3.4 million households have installed solar panels, less than any other city or region it analysed. What a failure.

Power concedes nothing without a demand. We demand solar power for the people.

1 thought on “Climate Emergency measure No.2: Solar Power for the People”