Barcelona is blessed with amazing natural infrastructure. Backed by mountains, flanked by two rivers and with a horizon stretching across the blue sea of the Mediterranean.

My wonderful guide Carlos Orti of Barcelona Camina , took me up to the mountains by funicular train for a strategic view across the city.

In the late 19th century, the ancient city walls, (which were creating a cauldron of disease), were demolished and Eixample or ‘Expansion’ was built between the old city and the surrounding small towns of Sants, Gràcia, Sant Andreu etc.

Ildefons Cerdà was the visionary, pioneering Catalan urban planner whose street layout is characterised by long straight streets, a strict grid pattern crossed by wide avenues, and octagonal city blocks. Cerdà, considered traffic and transport along with sunlight and ventilation in coming up with his characteristic octagonal blocks. I was told that the street design was to have facilitated a tram network.

The core idea was that the city should breathe and the growing population could be spread out equally, as well as providing green spaces within each block.

Unfortunately Cerdà had not anticipated that the streets would become polluted and congested with cars and motorcycles. The wide avenues became one way motor traffic dominated speed drags. Random parking of motorcycles and cars blocked the safe passage of pedestrians and cyclists.

Barcelona has been working hard to reverse this trend for the last ten years, improving pedestrian spaces, making walking a desirable and healthy alternative to car use. The metro is well designed and intutive and is undergoing expansion. There is also a well connected train and bus network.

The next phase is the so called Superilles or ‘Superblocks’ which aims to make secondary streets into ‘citizen spaces’ for culture, leisure and the community’.  In such a densely populated City with a notable absence of green space, this will create vital greening as well as quality public space.

Ada Colau, the current Mayor of Barcelona, aims to reduce car use by 21% within her Mayoralty and increase mobility by foot, bike and public transport. The new Superilles or ‘Superblocks’ will be complemented by the introduction of 300km of new cycling lanes.

“It’s no surprise that this concept was born here,” said  Mercedes Vidal, Councillor for Mobility,  “In a city as dense as ours, it’s all the more necessary to re-conquer spaces.” If all goes as planned, around seven of the 13.8 million sq metres now dedicated to motorised traffic will be freed up.

Everywhere I went I found creative innovation, experimentation and purposeful redesign to make the city better for street life. I have never seen so many street configurations. It really is an experimental laboratory for Urban Design. I personally walked and walked for kilometres, inspired by the imaginative approach to urban design.

Walking in the city is enabled by phased lights that automatically work for pedestrians. Not a pedestrian green wave but still a sense that there is no advantage for the motor vehicle. There are pedestrian crossings at every junction, no need to run for your life. The crossings are consistant and reliable.

I was staying in Poblenou where the new Superilla was making waves. Local resident and Urban Mobility expert Silvia Cassoran had received threats for her support of the superilla. One local car dealer seemed to be leading dissent. However, on the ground. I saw free range kids, families and locals enjoying the new car-free spaces. 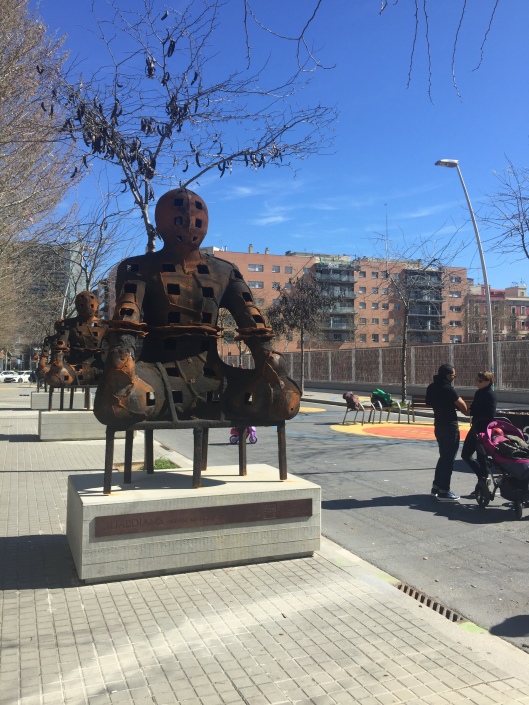 Every Superilla will be designed to compliment the surrounding streets, Carlos told me. There is not a fixed ‘superilla’ blueprint. Every area is considered separately to reflect local needs.

The latest Superilla, currenly under construction, is around the historic food market of Sant Antoni. It made me think of how the streets around The Borough food market and Smithfield would benefit from similar redesign. 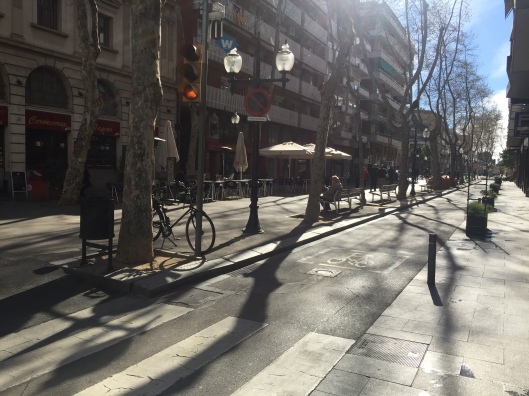 The Ramblas were also something of a revelation for me. This is old infrastructure but they are very popular centres of street life in Barcelona. I walked the 1.3km of La Rambla from Plaça de Catalunya down to the sea. But what surprised me was how many streets in Barcelona had Ramblas. These are central kerb raised pedestrian areas flanked by two narrow service roads with pavements adjoined to the shops and restaurants that line the street.

The campaigners at Barcelona Camina told me that the course of Las Ramblas was originally a sewage-filled stream-bed, usually dry but an important drain for the heavy rainwater flowing from the Collserola hills.. Many of the other Ramblas in Barcelona fulfill the same purpose. This may  be the reason that Barcelona has managed to stop cars from encroaching on this quality public space. Pedestrians are centre stage in this street configuration.  I feel this design would benefit many high streets in London.

Running across the city in a diagonal is the aptly named Avinguda Diagonal. There were two diagonal streets proposed in Cerda’s original design but this is the only one that was completed. Like Paris’ Champs Elysees and Copenhagen’s Aboulevarden, this is an eight lane motor vehicle monstrosity that cuts right through the heart of the city.

There was much discussion and political debate about the two trams that currently stop abruptly at either side of the City Centre on the Diagonal. Ada Colau, Mayor of Barcelona, naturally wants to connect the two sides, making the tram a viable and efficient service for those in the Municipalities as well as those living in the city.

Political point scoring was disrupting this obvious and vital transport project. It was sad to see how tribal politics can  block vital sustainable transport that would benefit all citizens. Air quality is not surprisingly very poor around eight lanes of motor traffic. The roar is deafening and parents try and send their children to schools uphill to avoid exposure.

Replacing motor traffic with an electrified tram would cut down on traffic congestion and air pollution and make the case for a much needed road diet. Reallocating space to protected cycle lanes is already happening, but the current lanes on the Diagonal are exposed to the worst of the pollution, by being positioned in the middle of the road.

With a new metro under construction, an opportunity has arisen to redesign a large swathe of previously car dominated space surrounding the Diagonal in Central Barcelona. I found these urban growing spaces right in  the heart of the city. Together with fun paint and experimental urban design, this is a place to watch as it  develops. It is a a creative opportunity to radically re-imagine the centre of a city. 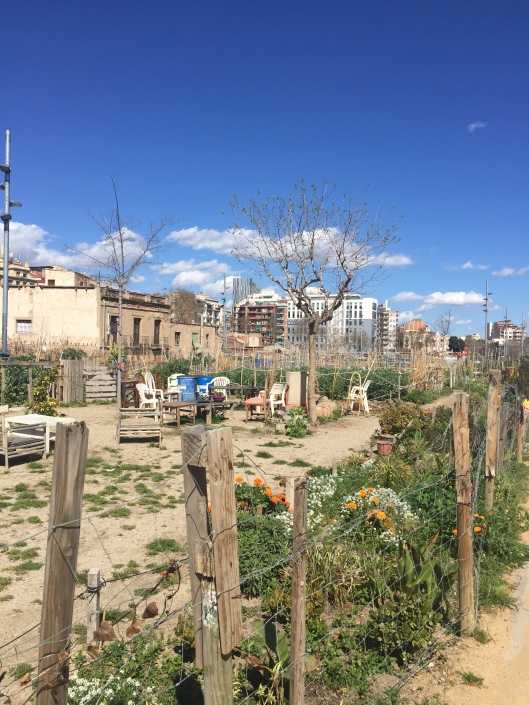 Food growing in the heart of the city

Luis Invader of @CBinvaders is a local activist (with an important mission to keep motorcycles out of bike lanes). He kindly lent me his bike and took me on a tour of the ‘good’ and the ‘ugly’ cycling infrastructure.

The next day we joined a ‘cycling safari’ with Mercedes Vidal  Mobility Councillor, to see the latest cycling infrastructure. I certainly felt that there was more of a sense of a joined up network of protected lanes than London. The cycle lanes are not as consistant or intuitive as Copenhagen but building up a cycling network is helping to create a groundswell of new cyclists.

There are also many similarities with London.  The Mayor of Barcelona understands the need to to balance cycling infrastructure with a strong demand for walking. 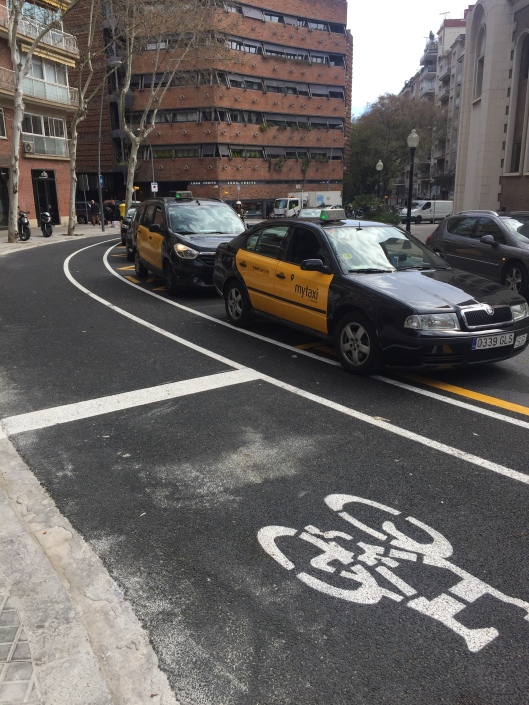 With Biciclot Co op and Carlos Orti at Bici Hub

Even Mikael Colville-Anderson of Copenhagenize lusts after this  dedicated cycling hub in Barcelona. They currently don’t have a dedicated building for cycling in Copenhagen.

Teaching Cycle maintenance and repair, holding events and cultural activities as well as joining up with other sustainable transport campaigners is their mission. This is supported as an independent cycling facility by the Mayor Ada Colau..

265,000 motorcycles blight the city. Whether blocking pavements, encroaching on cycle lanes where families with small children are cycling  or speeding with a roar of arrogance. Electric bicycles would make an ideal replacement, well suited to the hillside terrain whilst being more civilised, space effcient and not belching out toxic airpollution. 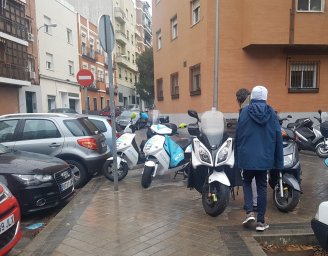 What can London learn from Barcelona? 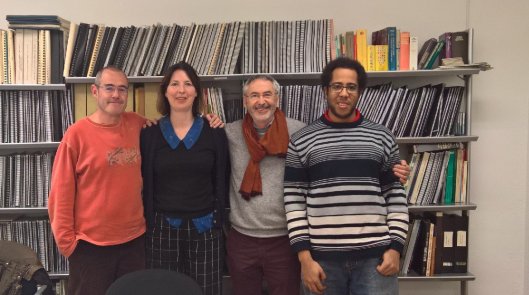 With the 3 presidents of Barcelona Camina, Catalunya Camina and Espana Andando